Does your autoimmune disease come with a side of food reactions that cause symptom flare-ups? You may be part of the 15-20% of people who experience food sensitivities and intolerances (20). The pain and discomfort can be invisible, and are often misdiagnosed or dismissed despite their severity.

These buzzwords can also cause a great deal of confusion. People with food sensitivities, intolerances, and even allergies and celiac disease can exhibit similar symptoms; however each condition works in a different way. Although they are often confused with sensitivities and intolerances, allergies are fairly easy to differentiate.

Allergies are specific IgE-mediated immune responses to substances. An allergic reaction produces IgE antibodies, which attack the offending substance (like pet dander, pollen, bee venom, or peanuts). This triggers a release of histamine, causing immediate, severe, and often life-threatening reactions. The symptoms are usually experienced in the airways or on the skin in the form of anaphylaxis or hives.
In the event of exposure to an allergen, treatment must include a swift injection of epinephrine (widely known as an EpiPen) or as a second wave of defense, administration of an antihistamine.

About 35% of Americans have reported a food allergy, but it is likely that a portion of these cases are in fact non-immune-mediated food intolerances (1). While research is limited and most food allergy data relies of self-reported information, actual prevalence may be up to 10%, especially in Western countries (2).

While conducting your own online research, you may notice that intolerances are sometimes called sensitivities and vice versa. The words “intolerance” or “food hypersensitivity” may also be used as an umbrella term for various non-allergic reactions to food, as is evident in some scientific studies.

For the purpose of clarity, however, we will refer to the European Society of Neurogastroenterology and Motility (ESNM) for information on the subject. ESNM is a nonprofit society uniting medical professionals all over the world. Their Gut Microbiota for Health section focuses on sharing knowledge and promoting debate regarding the microbiome.

The infographic below explains the differences between a sensitivity and an intolerance, and their relationship to the gut microbiota. 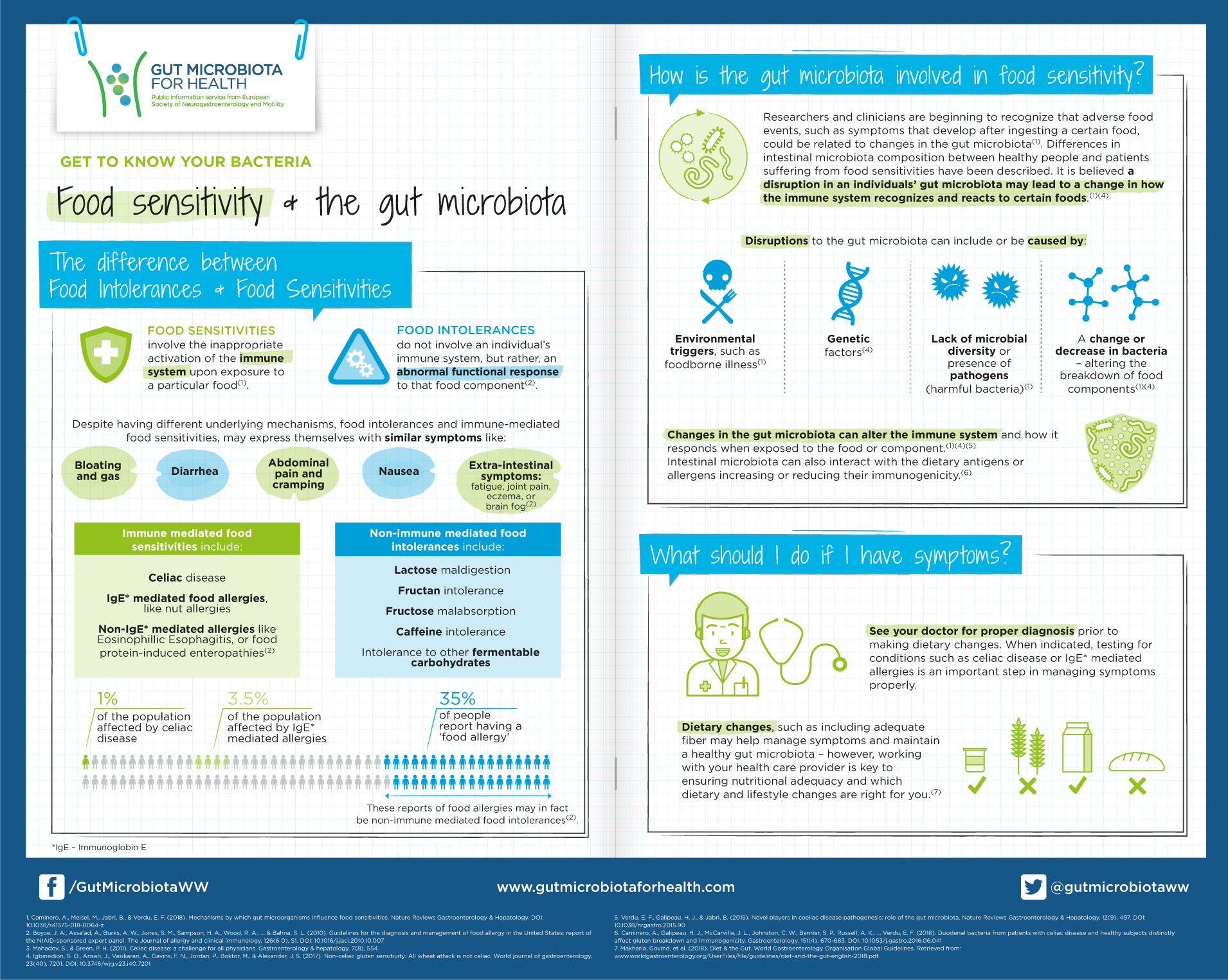 The ESNM Gut Microbiota for Health section defines an intolerance as an abnormal, non-immune mediated, functional response to a food. This could result from an enzyme deficiency, malabsorption, or other issues.

Individuals with food intolerance are unable to properly process certain foods in the digestive tract—think lactose in cow’s milk or histamine in fermented foods. Intolerances trigger symptoms such as abdominal pain, bloating, gas, nausea, and diarrhea.

In the case of milk, intolerant individuals do not produce any or enough lactase to fully break down the lactose (milk sugars) and enable absorption by the body. The dosage tends to have an effect on the severity of the reaction, which also varies depending on the individual.
Lactose intolerance is common after infancy, and affects roughly 65% of the world’s population. It is extremely prevalent in African Americans, Hispanics, and Asians (3).

People with histamine intolerance may lack the enzyme called diamine oxidase (a.k.a. DAO), that is primarily responsible for breaking down ingested histamine and preventing build-up and absorption by the bloodstream.

As histamine intolerance is less studied and often misdiagnosed, the true prevalence is unknown, however it is estimated that it affects roughly 1% of the population (4).

Lactose and histamine intolerances are functional and primarily involve the digestive system.
Other adverse food reactions—like sensitivities—may involve the immune system, but in a different way than allergies.

Food sensitivities are still a debated issue, as this term is not an official medical diagnosis and the scientific world has not yet come to a consensus on its precise meaning.

The ESNM Gut Microbiota for Health section offers some clarity, reporting that sensitivities result from an inappropriate activation of the immune system upon exposure to a particular food. This is an IgG-mediated immune response, as opposed to the IgE-mediated response involved in allergic reactions (9) or an autoimmune response as in celiac disease. Some sensitivities, like wheat or gluten, may be associated with autoimmune markers, however the mechanisms remain largely unknown (26).

Food sensitivities can cause a wide range of painful or uncomfortable reactions that may be felt immediately, or even days later. Potential symptoms include abdominal pain, anxiety, bloating, brain fog, diarrhea, fatigue, headaches, heartburn, joint pain, nausea, and rashes, which closely mirror many autoimmune disease symptoms.

Most food sensitivities are self-reported and many are discovered through elimination diets, as testing is full of controversy. Most experts agree that IgG testing is inaccurate and not a viable method for identifying trigger foods, as high antibody levels may actually indicate tolerance to a particular food rather than intolerance (10, 11).

A contributing factor in food sensitivities seems to be increased intestinal permeability, otherwise known as leaky gut. This condition is often seen in people with autoimmune disease, including celiac (12, 28). When the intestinal lining becomes too permeable, unwelcome molecules can cross the gut barrier and enter the bloodstream. The immune system sees these molecules—even partially digested food proteins or gut microbes—as foreign bodies and therefore prepares to attack them (13).

This imbalanced immune response may also involve the gut microbiome. Researchers suspect that “a disruption in an individual’s gut microbiota may lead to a change in how the immune system recognizes and reacts to certain foods” (1).
Eating trigger foods can result in inflammation and further disruptions in the gut microbiota.

Thus, it is no surprise that many people with autoimmune disease—who so often exhibit intestinal impermeability, chronic inflammation, and compromised gut health—may experience food sensitivities (14, 17, 8).

*NOTE: depending on the individual, adverse reactions to foods on this list may not result from IgG-mediated immune responses, as research on food sensitivities is very limited. In addition, not enough about NCGS/NCWS is known to determine whether it is immune-mediated or not.

Unlike allergies, intolerances, and senstivities, celiac disease is a lifelong, genetic autoimmune disorder in which the body mistakenly attacks itself.

When a person with celiac disease ingests gluten (a protein found in wheat, barley, and rye) the immune system reacts by mounting an attack against the body’s own healthy cells, damaging the villi lining the small intestine. If this continues overtime, many celiacs experience the effects of malabsorption as the villi are unable to send nutrients into the bloodstream.

There are over 200 symptoms of celiac disease. The most widely experienced include fatigue, cognitive problems like brain fog, neurological problems like severe headaches, and digestive issues such as bloating, diarrhea, constipation, gas, abdominal pain, and nausea and vomiting (31). Many people with celiac disease experience kaleidoscope of symptoms, including anxiety, depression, mouth ulcers, skin rashes, joint pain, numbness and tingling, that result in misdiagnoses and a challenging path to relief.

Celiac disease can be life-threatening if left untreated, and include intestinal, neurological, and cognitive damage and the development of additional autoimmune conditions. Currently, around 1.4% of the global population lives with celiac disease (32).

For more information and resources on celiac disease, check out our Celiac Education page.

Treatments for food sensitivities and intolerances may involve:

Remember to always discuss your symptoms and concerns with your practitioners, and avoid self-diagnosing.